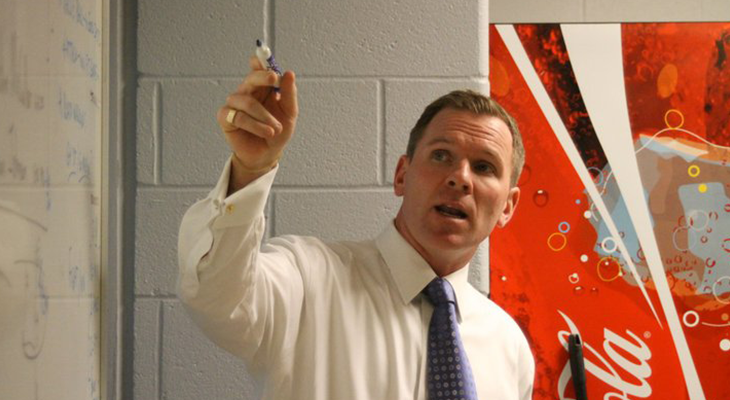 CENTER VALLEY, Pa. – The Patriot League announced its CBS Sports Network television schedule for the 2015-16 season on Monday with 16 men’s and three women’s contests set to air, including both the Men and Women’s Championship Games.

Thirteen men’s basketball contests and two women’s games will air on CBS Sports Network during the regular season, with the return of flex scheduling for the men’s matchups on the final two weekends. The coverage begins with two men’s non-League contests on the opening weekend of the college basketball season as Florida visits Navy in the Veterans Classic at the Naval Academy on Nov. 13 at 9:30 p.m. and Bucknell hosts Wake Forest on Nov. 15 at 1 p.m.

Three men’s contests will open the CBS Sports Network coverage for the Patriot League schedule as Bucknell visits Lehigh on Jan. 11 at 7:30 p.m., American heads to Army West Point on Jan. 17 at 12 p.m. and Loyola University Maryland goes to Boston University on Jan. 18 at 7:30 p.m. A doubleheader between Navy and Army West Point will be on tap the following weekend with the contests played at Madison Square Garden on Jan. 23, with the women’s game airing at 11:30 a.m. and the men’s contest to tip at 2 p.m. Two more Patriot League men’s games complete the schedule for the month on CBS Sports Network as Lafayette visits Bucknell on Jan. 25 at 7:30 p.m. and Lehigh goes to Boston University on Jan. 31 at 12 p.m.

The February slate of Patriot League action on CBS Sports Network begins with a pair of Monday evening men’s contests as Colgate visits Army on Feb. 8 and Holy Cross is at Lehigh on Feb. 15, with both games tipping off at 7:30 p.m. The action continues with another Army-West Point-Navy doubleheader on Feb. 20, this time from Annapolis as the women tip off on CBS Sports Network at 11 a.m. followed by the men at 1:30 p.m.
The first men’s basketball flex game follows on Feb. 21 at 12 p.m., with another flex slot for the last day of the regular season on Feb. 27 at 12 p.m. The selection of the flex contests will be made no later than 10 days prior to each of the competition dates. Four Patriot League games will be eligible for the broadcast window on each of the dates.

CBS Sports Network, the 24-hour home of CBS Sports, is available across the country through local cable, video and telco providers and via satellite on DirecTV Channel 221 and Dish Network Channel 158. For more information, and to access the CBS Sports Network channel finder, go towww.cbssportsnetwork.com.

The Patriot League continually demonstrates that student-athletes can excel at both academics and athletics without sacrificing its high standards. The Patriot League’s athletic success is achieved while its member institutions remain committed to its founding principle of admitting and graduating student-athletes that are academically representative of their class. Participation in athletics at Patriot League institutions is viewed as an important component of a well-rounded education.